Book of the Month: [December 2013] - HALF of a YELLOW SUN By Chimamanda Ngozi Adichie 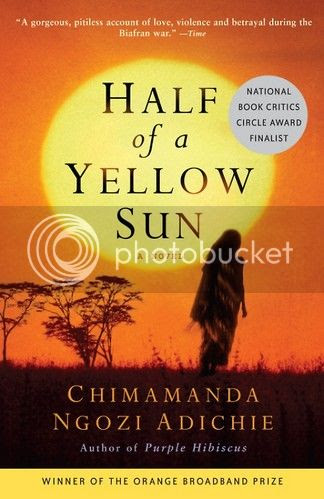 Chimanmanda Ngozi Adichie, is a popular, bestselling author. Her novels are riveting stories, full of richly developed characters, that will pull you in and transform your notion of family dynamics, tragic events, struggles, life-changing circumstances, redemption and triumph.

To date, I've only read Chimamanda Ngozi Adichie's novel, 'Purple Hibiscus'. It's a story that will stay with you, well after you've read it. Be sure to check that out as well.

I look forward to delving into 'Half of a Yellow Sun'.  As always...


With effortless grace, celebrated author Chimamanda Ngozi Adichie illuminates a seminal moment in modern African history: Biafra's impassioned struggle to establish an independent republic in southeastern Nigeria during the late 1960s. We experience this tumultuous decade alongside five unforgettable characters: Ugwu, a thirteen-year-old houseboy who works for Odenigbo, a university professor full of revolutionary zeal; Olanna, the professor’s beautiful young mistress who has abandoned her life in Lagos for a dusty town and her lover’s charm; and Richard, a shy young Englishman infatuated with Olanna’s willful twin sister Kainene. Half of a Yellow Sun is a tremendously evocative novel of the promise, hope, and disappointment of the Biafran war.

Via The New Yorker:


Based loosely on political events in nineteen-sixties Nigeria, this novel focusses on two wealthy Igbo sisters, Olanna and Kainene, who drift apart as the newly independent nation struggles to remain unified. Olanna falls for an imperious academic whose political convictions mask his personal weaknesses; meanwhile, Kainene becomes involved with a shy, studious British expat. After a series of massacres targeting the Igbo people, the carefully genteel world of the two couples disintegrates. Adichie indicts the outside world for its indifference and probes the arrogance and ignorance that perpetuated the conflict. Yet this is no polemic. The characters and landscape are vividly painted, and details are often used to heartbreaking effect: soldiers, waiting to be armed, clutch sticks carved into the shape of rifles; an Igbo mother, in flight from a massacre, carries her daughter's severed head, the hair lovingly braided. Copyright © 2006 Click here to subscribe to The New Yorker

Posted by Books Novels And More at 3:22 PM

Email ThisBlogThis!Share to TwitterShare to FacebookShare to Pinterest
Labels: Authors, Book Of The Month, Books, Chimamanda Ngozi Adichie, Drama, Half of a Yellow Sun, War