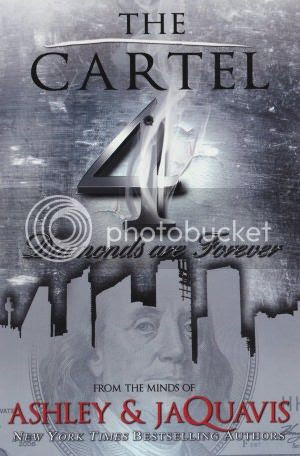 The explosive CARTEL series by Ashley & JaQuavis was hella crazy with just the trilogy. Surprisingly a fourth installment was released late last year.

Never got around to reading the fourth novel in the series and decided it was the perfect book of the month choice for June.

Be sure to pick up and/or download the previous three titles in THE CARTEL series to read if you aren't familiar with the series.

If you thought you’d read the final chapter of the Cartel saga, you ain’t seen nothing yet!


Ashley & JaQuavis return to the mean streets of Miami in the thrilling, chilling, blood-spilling The Cartel 4: Diamonds Are Forever. Young Carter has just finished off his brother, Mecca Diamond.


But that won’t bring back Miamor, the woman Carter loved, the woman with Diamond blood on her hands, the woman Mecca killed.


Grief-stricken and disgusted, Carter turns his back on the streets and leaves his empire in the hands of the merciless Zyir. Now, Zyir runs the game in Miami, but he knows he can never stop watching his back.


After barely surviving an attempt on her life, Breeze Diamond rules by Zyir’s side—and she may want the throne to herself. Even if she doesn’t, there are plenty of young thugs out there who wouldn’t hesitate to put a bullet in Zyir’s coldly calculating brain.


And Carter’s retirement may prove short-lived, as two figures from his past come back—apparently from the dead—to reignite his rage and his passion.


First there’s Miamor, who appears like a vengeful ghost at his door late one rainy night. And then there’s Monroe “Money” Diamond, who wants his city back!

Posted by Books Novels And More at 5:01 PM